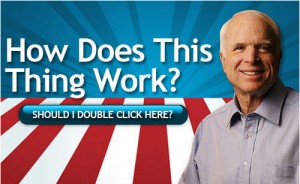 ARLINGTON, VA — With today’s Wall Street Journal report that pro-Obama Democrats have “airdropped a mini-army of 30 lawyers, investigators and opposition researchers into Anchorage” to dig for dirt on our vice presidential nominee, the McCain-Palin campaign today launched the Palin Truth Squad to counter recent attacks on Governor Sarah Palin, her family, her friends and her record of accomplishment. The Palin Truth Squad will set the record straight against Internet and liberal smears of Governor Palin.
(Bron: McCain-Palin 2008 Launches Truth Squad to Counter Attacks on Governor Sarah Palin)

ARLINGTON, VA — With today’s report that Democrats have “airdropped a mini-army of 30 lawyers, investigators and opposition researchers into Anchorage” to find all the skeletons in Sarah Palin’s closet before they come to life and overrun Alaska, the McCain-Palin campaign has launched the Palin Truth Squad to keep America safe from the truth about Governor Sarah Palin, her family, her cronies, and her inexperience. In keeping with the general strategy of the McCain campaign, the Palin Truth Squad will make sure that the truth about Sarah Palin is kept as far from American voters as possible.